Working aged men (25-54 years old) account for the largest number of suicide deaths in the U.S. These men are also the least likely to receive any kind of support. They don’t talk about it with their friends. They don’t share with their family. And they sure as heck don’t seek professional treatment. They are the victims of problematic thinking that says mental health disorders are unmanly signs of weakness.

Men may struggle with mental health issues including depression, suicidal thinking, and addictions, but they are far less likely to seek help than are women. This may be partially because men can often brush off or bottle up difficult emotions rather than process them. Another reason may be some men’s tendency to view discussion about therapy and mental health as a way to take away their masculinity. But in the same way masculinity may take many forms, the language we use to discuss mental health can also shift to engage a diverse range of people.

Working with a therapist who uses a goal-oriented approach and who places therapeutic goals in the context of creating a better quality of life may help some men see the value in doing just that.

WHAT BRINGS MEN TO THERAPY?

In recent years, the role of men in the workplace, in relationships, and in society has changed to more strongly reflect equality. As this happens, some men begin to feel they have lost their traditional place or roles within society. This can cause stress and frustration as men seek to find a place through employment or within a relationship. Stress at one’s job, in familial relationships, or as a result of one’s pursuit of romantic relationships and intimacy may also lead men to seek therapy.

One challenge men may face is the way symptoms of mental health conditions are experienced. For example, a man who is experiencing depression may be angry and irritable. Men in general have been shown to less often cry, discuss their feelings, or express thoughts of suicide.

Posttraumatic stress may also lead to anger, as well as aggression, and men with PTSD may be somewhat more likely to cope with symptoms by using drugs or alcohol. Men may avoid seeking help until a point of crisis is reached, fearing that others will see them as weak, but treatment may become more complicated as a result.

Some men may experience fear and shame related to preconceived notions of their roles and responsibilities. For example, a man whose employment income is not sufficient to provide for the needs of his family may experience feelings of frustration or emasculation stemming from the belief that he should be able to provide for his family. This may especially be the case when a spouse or partner brings in more income or has a higher-paying job.

We are working on the couples 50-50 and equality but we are not there yet. So, even this transition can cause a lot of internal distress as much as relational.

DC VA Counseling Psychotherapy, LLC is recognized as a TOP Mental Health & Counseling Center for the Fairfax and Arlington, Virginia regions and is featured on the TOP Doctors Interviews which are seen on CNN Headline News, FOX News, Oprah Winfrey Network, MSNBC and other networks.

For more information visit www.relationshipseq.com
Isabel is also a writer and contributor of the
SAGE Encyclopedia of Marriage and Family Counseling 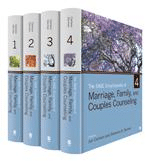